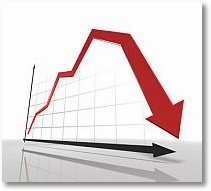 “Baton Rouge area home sales are down 19% through the first six months of 2009 as the effects of the national recession continue in the area. According to figures from the Greater Baton Rouge Association of Realtors Multiple Listing Service, there were 3,298 homes sold in the metro region through June, compared to 4,083 through June 2008. The average sale price was down 6.5%, from $207,072 in 2008 to $193,548. Local real estate officials say the housing market remains fairly strong because employment remains high locally. But tight credit markets and consumer unease are causing a slowdown in sales. The number of houses sold in East Baton Rouge Parish was down 21%, from 2,500 through the first half of 2008 to 1,965 through the end of last month. Livingston Parish saw a bigger drop in overall sales, with 509 homes sold as of June, compared with 670 through the first half of 2008. Ascension Parish had the smallest drop, with the number of houses sold falling by 4.8%, from 670 to 627. In the other category, which includes MLS sales in West Baton Rouge Parish and the Felicianas, there were 197 homes sold as of June, compared to 254 through the first six months of 2008.”