The chemical explosion, see below, last week took me by surprise! I’ve driven down this road many times over the years as it’s a major north-south traffic artery. What we’re finding out 1 week after the explosion is that approximately 95% of locals had no clue that there was even a hazardous chemicals “Plant” in operation off this road, especially those that lived within 1 mile. Obviously, this was not just a chemical storage warehouse. 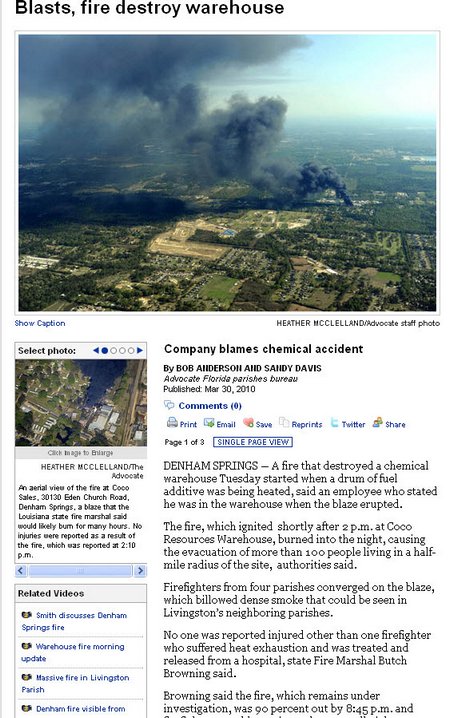 The article above about population is somewhat mis-stated. It states that there are more than 100 people living within 1/2 mile of the explosion. That’s kind of like saying more than 100 people live in Denham Springs. There are far many more than that living within 1/2 mile. There are 2 major residential subdivisions witin 1/8 mile of this warehouse. The residents of Carlton Oaks weren’t allowed back into their homes for 3 days after the explosion and now wonder have their home values plummeted over night. As I write this, almost one week after the explosion, some of the residents of the large manufactured housing development directly adjacent to the warehouse still have not been able to return to their homes.

Many locals are asking what happened last week and what idiots in the local and municipal governments approved the occupancy permits of a hazardous chemical plant in the middle of a residential neighborhood? The company name itself, Coco’s Resources Warehouse, doesn’t clearly explain that this was a hazardous materials “plant”, not just a storage warehouse.

North Park, a large 100 acre public recreational facility located within 1/2 mile, is presumed to have had 100s of kids and families there during the Easter holidays week off from school as the blast occurred shortly after 2pm. There are so many unanswered questions….and now a lawsuit. It’s my hope that the lawsuit not only targets the company who owned the warehouse but also those local and Parish governments that approved such a hazardous use in this residential neighborhood. They truly bear the majority of the blame was for this explosion.